Data Mining the Digital Gold Rush: 4 Companies That Get It

Taking the guesswork out of finding and promoting hits has never been easier thanks to "Big Data" analytical tools and real-time insights -- and the global music industry is listening.

For decades, the music business ran largely on instinct: magic ears, gut feelings, weird hunches. Success had a thousand fathers, as well as a certain mystery. Label executives knew a hit when they heard one, and they promoted it until the public agreed -- or not.

Sometimes, data helped. By the early 1990s, Atlantic Records had a research team calling independent retailers to ask which local artists were selling well. In 1993, an assistant named Scott Schiff discovered that an unknown band was outselling superstars in certain South Carolina stores. As the story goes, Atlantic A&R executives didn't like the album, but then-co-chairman Doug Morris overruled his lieutenants to sign the band -- Hootie & The Blowfish. It went on to sell more than 10 million copies of its major-label debut.

These days, calling stores to ask about CD sales is as archaic as the idea of an album that sells 10 million copies. The industry is now in the age of "Big Data" -- the information generated by digital platforms like Spotify and Twitter, and the tools to analyze it for insights. Label execs and managers can see what songs perform on streaming services, as well as what audiences those songs resonate with, what other music fans of a particular song listen to and even where songs fit into listening patterns -- not to mention where potential fans live and what kinds of concerts they attend.

"We're not approaching it in the traditional music industry way: 'This is a hit and I goddamn know it,'" says Alex White, CEO/co-founder of Next Big Sound, a company that uses data from Spotify, social media and other sources to help labels, managers and brands navigate the music business. "Now that we can track every song on Spotify and YouTube, it's a Bayesian probabilistic world, where we can say that 75 percent of the time when we see the momentum you're seeing, this artist will sell a million within a year -- and we can update that on a daily basis."

The music business of the future may require some new vocabulary: "Bayesian probability," named for 18th century mathematician Thomas Bayes, is a concept in logic, not a prog-rock act. (Although it wouldn't be a bad name for one.) Here are four companies that are already fluent -- and rely on more than their instincts. We have a hunch they're on to something.

Big Idea
In 2009, when its founders were finishing Northwestern University, Next Big Sound ran a website that let users look at different measures of musician popularity and predict which acts would make it big. There was only one problem, according to White: "There was no way to make money doing that." So he and co-founders Samir Rayani and David Hoffman decided to go into the data business. Now, Next Big Sound tracks Facebook likes, Twitter mentions, YouTube and Vevo views, website traffic, Spotify data and other measures of popularity in an onscreen "dashboard." (It licenses social media and digital chart data to Billboard.) Much of the value of the New York-based company's services lies in how it tracks different information streams in real time to measure how Twitter mentions lead to website traffic, for example. 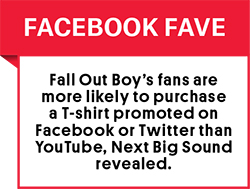 Next Big Sound makes most of its data available as free tools and focuses on major clients: the Universal and Sony labels, big management companies and brands. (White declines to say whether the company, which has 22 employees, is profitable.) Stu Smith, who introduced White to music executives when he worked at Red Light Management, now uses the service as head of music partnerships at Teespring, an Internet company that lets users design and sell clothing. Based on information from Next Big Sound, he recently advised Fall Out Boy to promote a Teespring T-shirt project on Facebook and Twitter, rather than YouTube.

Big Insight
"It's not unlike the mental model a lot of music executives have, where they say they should be doing this by a certain time after the release," says White. "But when you track the data on a daily basis, it's not alchemy -- it's a very measured series of promotion and marketing events at different stages."

Big Idea
The small-venue division of Live Nation set up its Ones to Watch program to promote developing-act tours in a way that many labels no longer can -- and data is key to every step of the process.

Big Success
In 2012, after the country-rock band Blackberry Smoke played St. Andrews Hall in Detroit on a Ones to Watch tour, manager Trey Wilson sat down to look at how far fans drove to get there. House of Blues was able to provide more data about the group's audience than he had ever seen before -- including which audiences are most inclined to see the band, where they live and what kind of marketing they respond to. On its next tour, Blackberry Smoke played Flint, Mich., drawing some fans from Detroit, as well as a few other markets suggested by House of Blues' data.

Big Insight
House of Blues uses an algorithm to pick "affinity artists" whose fans might appreciate a Ones to Watch act. (In the case of Blackberry Smoke, it chose the Zac Brown Band, ZZ Top and Lynyrd Skynyrd, among others.) Then it identifies fans who have purchased tickets to concerts by those artists and sends them an email about the upcoming Ones to Watch show -- along with a discount offer. "We mine data to sell more tickets and get bands more exposure," says House of Blues COO Ben Weeden.

Big Idea
Like Next Big Sound, Universal Music Group's Artist Portal lets users customize and compare data. It also offers remarkably specific insights into Spotify usage -- not only how many times a song streams, but what kinds of people are streaming it, what else is on those listeners' playlists and how specific songs resonate with certain audiences. (Managers of Universal acts also can see this data for their clients.) "Once something is on Spotify, it's a big experiment," says Paul Gathercole, Universal Music vp digital tools. 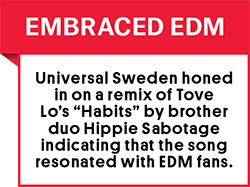 Looking at UMG's Artist Portal in 2014, Universal Sweden digital strategy manager Ankit Desai saw that Swedish singer-songwriter Tove Lo had a following of fans who generally listened to alternative rock in France and the Netherlands. In her home country, though, Tove Lo seemed to attract fans who -generally listened to electronic music; the Hippie Sabotage remix of "Habits (Stay High)" accounted for about 70 percent of her streams there. Desai took this information to the artist's A&R team -- "it was part of the conversation," he says -- which decided to market her more to EDM fans and focus on promoting tracks that would appeal to them, like her vocal appearance on Alesso's "Heroes (We Could Be)," which became a No. 5 hit in Sweden.

Big Insight
"The data itself isn't the challenge," says Gathercole. "The challenge is, how does an organization gear up to make the most of it?" To that end, Universal Music has a 16--person team devoted to improving the Artist Portal and interpreting the information it offers. "Then you can look for patterns, correlation and meaning," says Gathercole, "to better put our content out in the world."

4) THE ECHO NEST AT SPOTIFY

Big Idea
Even by the standards of big data, the Somerville, Mass.-based Echo Nest operates on a massive scale: Its database includes more than 36 million songs, categorized with data points ranging from pitch and tempo to mood and danceability. The company was founded in 2005 at MIT's Media Lab by Tristan Jehan and Brian Whitman, who wanted to find a better way to understand music than the affinity model used by most online companies, which assumes that users who like some of the same music share the same tastes. To that end, it analyzes audio "fingerprints" and crawls the Web for information about music, including reviews, blogs and social media postings. The company started by licensing its data and development tools to online music companies, but it also has become something of a skunkworks for Spotify, which bought it in 2014 for a reported $100 million.

Big Success
"We can identify a 'cluster' where you're listening to the same kinds of songs at different times every week and identify a commonality there," says Jim Lucchese, CEO of The Echo Nest at Spotify. In other words, Spotify knows if you've been going to the gym.

Big Insight
The next step is "situational playlisting" -- using The Echo Nest's understanding of music and users to figure out what a listener wants to hear at a given moment. (Like almost everything The Echo Nest does, it will be invisible to Spotify users.) "We want to connect the right playlist to the right listener at the right moment," says Lucchese. "We're putting those pieces together now."

This article first appeared in the April 11 issue of Billboard.